This means rivers with cool, clean water and a variety of habitats that allow fish to rest, hide from predators, and spawn. It means intact estuaries where salmon can grow and transition to and from saltwater. And it means rivers and shorelines with ample food.

In Washington, 50-90 percent of land along waterways (riparian areas) has been lost or extensively modified by humans.22 Riparian areas and floodplains are critical for salmon and will increase in importance as environmental conditions become more extreme due to climate change. Forested riparian areas provide shade and cool the water, filter polluted water, and hold trees that drop branches and leaves into the water, increasing the amount and quality of habitat in streams. Floodplains slow and store water during all times of the year, provide shelter and food for young fish, and buffer communities against floods. Read more about riparian and other habitat.

The Washington Department of Fish and Wildlife estimates there are 20,000 known barriers either partially or fully blocking salmon and steelhead from reaching their spawning grounds in Washington.

Washington has been making steady progress on fixing these barriers. Since 2005, more than 3,300 barriers have been corrected. The changes made to date have opened at least 3,000 miles of habitat to salmon and steelhead.

Despite the gains, far too many salmon are blocked from reaching their destinations by a variety of human-made structures, such as dams, roads, water storage, and other structures. While progress has been made, an increased rate of barrier corrections is needed. Read more.

Visit the Salmon Data Hub for more of the data behind the indicator charts and graphs used throughout this site.

The Watershed Health Monitoring program, run by the Washington Department of Ecology, measures the statewide and regional condition of stream habitat. It collects data about habitat and biological conditions in streams and adjacent riparian areas.

In this report, information is presented about four qualities of good salmon habitat: forested streambanks (riparian cover or canopy), logs and root wads in the water (large wood volume), a healthy amount and mix of bug species (an index of biotic integrity), and clean water (low sediment levels), each explained below.

Of all stream miles measured by the Washington Department of Ecology, the following conclusions are noted:

More Information About These Measures

Riparian areas are shorelines, streambanks, wetlands, and floodplains next to bodies of water that support and protect the health of the water. Plants in these areas shield streams from summer and winter temperature extremes, which can be fatal to fish. Leaves and branches shade the stream, cooling the water for salmon during warm months. Shade also can limit growth of algae. Excessive algae when it decays, robs oxygen from the water leaving less for fish. The plants also drop branches, leaves, and insects into the water. This provides food for fish. When branches and logs fall into streams, they slow the water and give salmon places to rest while feeding and places to hide from predators. Finally, the roots of the streamside plants prevent soil from entering the water and burying spawning gravel. Vegetation also filters contaminants out of the soil, reducing the amount entering water.

The Department of Ecology measured riparian cover at randomly selected streams. Ecology determined sparse levels of riparian cover by comparing with a separate set of relatively natural reference streams in each of three areas: western Washington, the eastern mountains of Washington, and the Columbia Plateau. More monitoring is necessary to see if this pattern in the chart persists and represents a trend.

Large wood in the form of tree root wads and logs are good for salmon. Healthy watersheds have enough trees to maintain an adequate supply of wood to fall into streams. Otherwise, adding wood to streams is a common way to immediately improve fish habitat while the watershed recovers. The wood slows the stream, which creates places for fish to rest and hide from predators. A slower stream will erode its banks less and therefore transport less sediment to the river. Wood also creates deep, cool pools. Wood also helps streams retain organic matter and nutrients, which are a food source for the insects and fish salmon eat.

The Department of Ecology rated whether the volume of wood in streams was low. Ratings were based on comparison to references streams. Scoring levels depend upon the natural setting and the width of the stream.

Stream Biological Health (or bug counts to non scientists) are another way to measure the health of a stream. If there is a good mix of species, it’s likely a healthy stream. When scientists look at biotic integrity, they are looking to see if the stream has the “ability to support and maintain a balanced, integrated, adaptive assemblage of organisms having species composition, diversity, and functional organization comparable to that of natural habitat of the region.” (Karr and Dudley 1981). In this report, the Department of Ecology examined biotic integrity for one assemblage, stream invertebrates.

A Benthic Index of Biotic Integrity (BIBI) measures collections of insects and similarly sized animals found on stream bottoms. Scientists look at their species compositions to assess stream conditions. Each species has a characteristic response to human-caused environmental changes. Ten data values (metrics) are combined into a single number (index) that provides an overall score. These types of indexes are used by many environmental monitoring programs throughout the Northwest and the world. The Department of Ecology has assigned poor ratings to BIBI scores, based on comparison to relatively natural conditions in each of three zones in the state: western Washington, eastern mountains, and the Columbia Plateau.

The bars in the graph reflect percent of estimated statewide stream length with poor BIBI scores.

Sediment can lower stream health. Although sedimentation is part of the natural cycle, land-disturbing activities cause extra sand and finer-sized particles to run into streams. This excess sediment causes many problems for salmon, including smothering fish eggs, changing the shape and route of the stream, and reducing the stream’s capacity to hold floodwater or provide cover for fish.

Department of Ecology field crews looked at hundreds of equally-spaced locations on the bottom of each stream and counted how many locations in each stream were occupied by particles that were the size of sand or smaller. Based on one report (Bryce et al., 2010), 15.2 percent sediment in a stream is generally the best for stream invertebrates. Therefore more than 15.2 percent sediment is considered “high.” (Note: The Department of Ecology added 5.5 percent to Bryce values after comparing results from two field methods. Department of Ecology measures across a larger portion of the stream channel than does Bryce.)

The chart above shows that about two-thirds of the recovery zone has more sediment in streams than what is preferred for invertebrate aquatic animals.

In addition to the four measures above, another measure of habitat quality is the amount healthy forest cover.

The 2020 State of Our Watersheds report by the Northwest Indian Fisheries Commission found that about 5 percent of the forest cover was removed between 2011 and 2016 in the Pacific Coast region, a trend likely to continue if protective actions are not taken. Loss of forestlands can harm salmon streams and water quality and quantity. 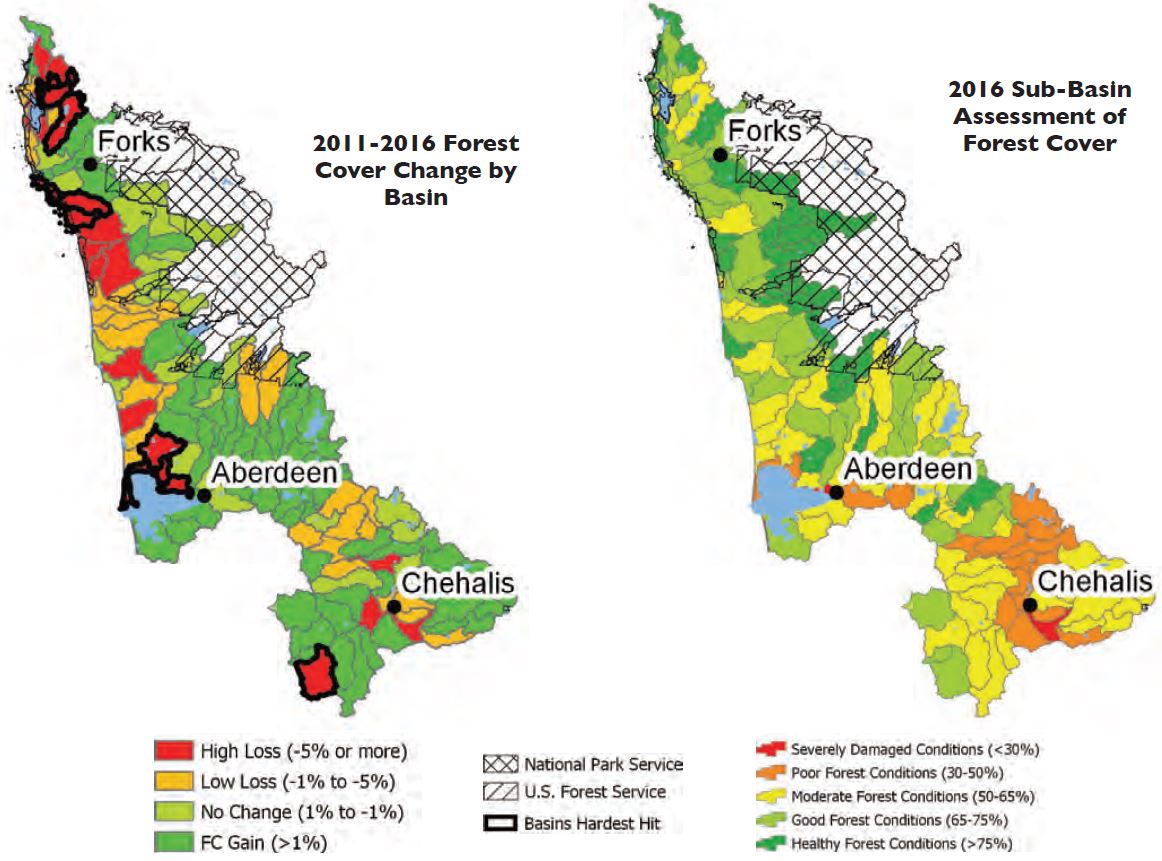 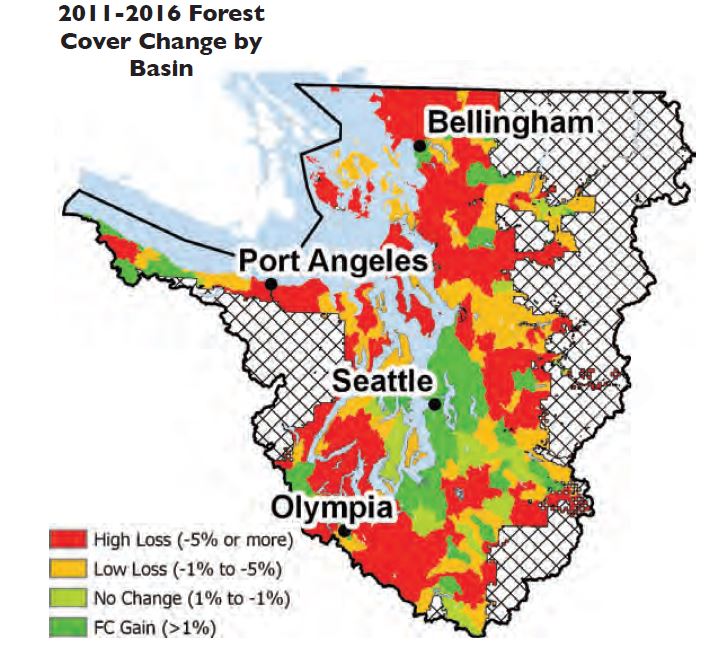 In some areas, habitat has been restored and the number of fish has increased. Washington’s salmon recovery organizations and tribes work hard to restore and protect salmon, steelhead, and bull trout habitat all over the state.

Included in the graphic above are restoration measures for three types of projects: riparian habitat treatments, estuary habitat treatments, and fish passage barrier corrections. It is important to note that this data only includes what is tracked by the Recreation and Conservation Office’s Salmon Recovery Portal and PRISM Project Search databases.